For decades, US stock exchanges have been taking centre stage in global equity offerings, thanks largely to the dollar hegemony and America’s strong economic leadership.

But a potential paradigm shift is brewing, with global funds gravitating towards Asian issuers that promise greater growth potentials. The world’s largest initial public offering so far this year has landed in Hong Kong.

The stars look aligned for a new wave of flourishing stock sales in Asia, where economic recovery, listing reforms, technological innovation and currency appreciation are combining to drive an equity capital boom.

The structural case is clear. Stock markets of Asian countries appear significantly underdeveloped relative to the size of their economies, implying huge potential for growth. For instance, the aggregate market capitalisation-to-GDP ratio is about 89 per cent for China (including Hong Kong) and 116 per cent for India, far below 221 per cent in the US and 136 per cent in the UK. 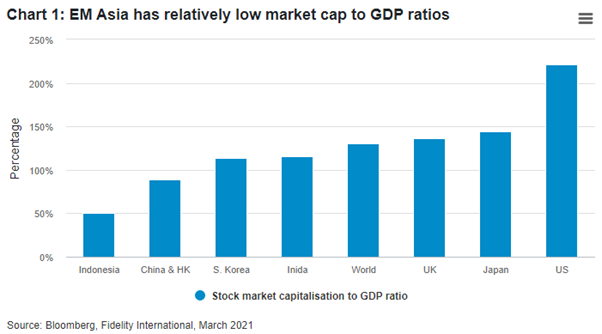 With a “first in, first out” advantage, China is leading a global economic recovery from the Covid-19 crisis, as domestic consumption rebounds and exporters take advantage of supply disruptions in Western countries. China pulled off a 2.3 per cent GDP expansion last year, the only growth among major economies worldwide. Other Asian economies including Vietnam and Taiwan also bucked the global growth downturn to report 2020 expansion.

In an era of zero to negative interest rates, especially in the West, international funds could find few better places than emerging Asia for decent returns. Growth in China, India and the ASEAN block will continue to outpace Western countries over the next few years, according to International Monetary Fund estimates. The IMF forecasts the Chinese economy will expand 8.1 per cent this year, while India will likely achieve a 11.5 per cent growth.

Keen to invigorate their capital markets, Asian policymakers have been busy rolling out reforms towards smoother listing and trading. A new venue for technology start-ups, known as the STAR Board, opened in Shanghai with a bang in 2019, featuring fewer trading curbs and lower profit thresholds for issuers than China’s other onshore exchanges. To encourage tech listings, regulators have also eased IPO approval rules for the ChiNext Board in Shenzhen.

Hong Kong has attracted a stream of biotech IPOs over the last three years, after the city’s exchange operator relaxed restrictions in 2018 to allow pre-profit and even pre-revenue issuers in the sector.

Meanwhile, India is planning bold reforms that could spur a capital market boom over the next few years. In a bid to boost efficiency, the government aims to privatise state-owned giants from banks to transport operators, with an initial divestment target of US$24 billion. Successful implementation of the programme would greatly enlarge India’s IPO pipeline and attract an influx of foreign capital. Similarly, Pakistan is considering privatising state-run companies across a wide range of sectors.

A tech listing boom is on the horizon for Southeast Asia, where market infrastructure is improving for a spate of unicorns that are reaching the right stage of maturity to go public. We expect to see billion-dollar offerings by ASEAN companies in business areas like e-commerce and ride hailing over the next few years.

At the current rate of transformation, we expect Asia will gather a critical mass of market infrastructure to rival US exchanges in the next five to 10 years. On a deal flow basis, the burgeoning Chinese capital market is already closing in on US bourses. Global deals are increasingly gravitating towards two centres: long-standing American venues and young but vibrant Chinese bourses. Last year, IPO proceeds totalled US$119 billion in China and Hong Kong, compared to US$181 billion raised in the US. Though still lagging on fundraising value, China and Hong Kong recorded 537 listings in the same period, exceeding a deal count of 509 for America. 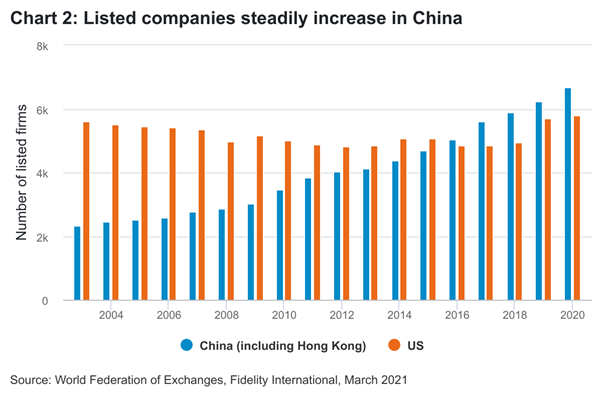 China is progressively opening its financial markets to foreign investors, who have been piling into the country’s onshore bonds and equities in recent quarters. Inflows are set to continue, as robust economic growth and a strong renminbi persuade more funds to boost their allocation to Chinese assets. Index compilers like MSCI and FTSE have in recent years been increasing the weighting of Chinese stocks in global equity benchmarks, further raising their appeal.

More recently, trade tensions between Beijing and Washington have been a double-edged sword for Asia’s equity capital market. On the one hand, geopolitical risks have spurred a flurry of Chinese tech firms quitting US exchanges and returning to Asia. The Eastward migration of Chinese listings will likely continue. On the other hand, Chinese issuers have come under scrutiny after Washington recently barred US investors from owning shares in a number of China-based firms. This has introduced greater near-term uncertainty.

Another medium-term challenge facing Asia’s IPO markets may be rules that could limit investor confidence. For instance, tight regulatory control over IPO pricing has been a concern among issuers and investors in China’s onshore market. We think this and other issues should be best addressed in future rounds of listing reform, and are encouraged by some of the liberalizations being piloted in areas like Shanghai’s STAR market.

However, these issues of geopolitical friction and market development need to be considered in the broader context that Western economies are facing huge pension funding gaps. Asia may still be a long way off becoming the world’s dominant listing hub, but we see its rising trajectory as clear and irreversible. However the headlines portray the headwinds, global capital will be funding Asia’s growth over the next decade.

Prior to making an investment decision, retail investors should seek advice from their financial adviser. This document is intended as general information only. Please remember past performance is not a guide to the future. Investors should also obtain and consider the Product Disclosure Statements ("PDS") for the fund(s) mentioned in this document before making any decision about whether to acquire the product. The PDS is available on www.fidelity.com.au or can be obtained by contacting Fidelity Australia on 1800 119 270. This document has been prepared without taking into account your objectives, financial situation or needs. You should consider such matters before acting on the information contained in this document. This document may include general commentary on market activity, industry or sector trends or other broad-based economic or political conditions which should not be construed as investment advice. Information stated herein about specific securities is subject to change. Any reference to specific securities should not be construed as a recommendation to buy, sell or hold these securities. While the information contained in this document has been prepared with reasonable care, no responsibility or liability is accepted for any errors or omissions or misstatements however caused. The document may not be reproduced or transmitted without prior written permission of Fidelity Australia. The issuer of Fidelity's funds is FIL Responsible Entity (Australia) Limited ABN 33 148 059 009.Details of Fidelity Australia’s provision of financial services to retail clients are set out in our Financial Services Guide, a copy of which can be downloaded from our website. 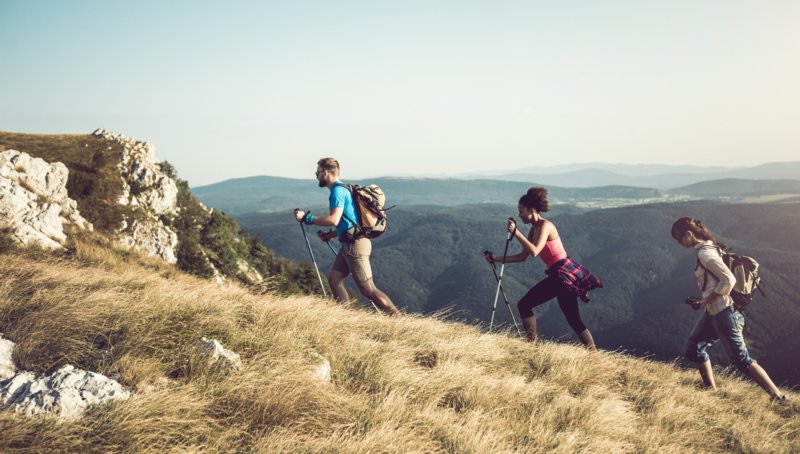 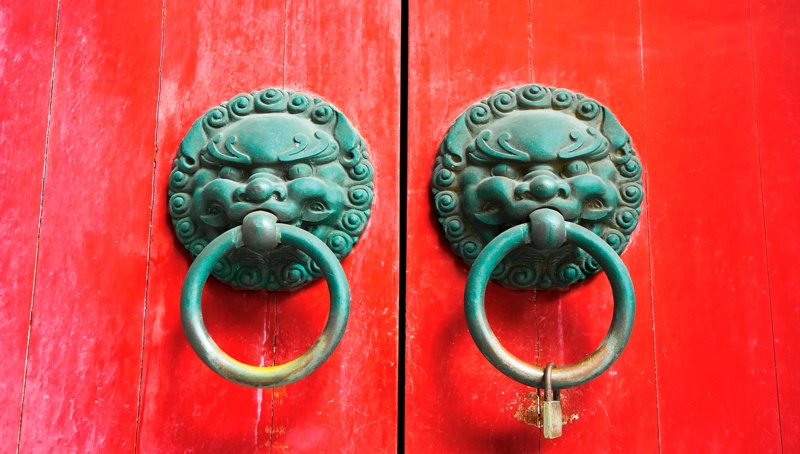 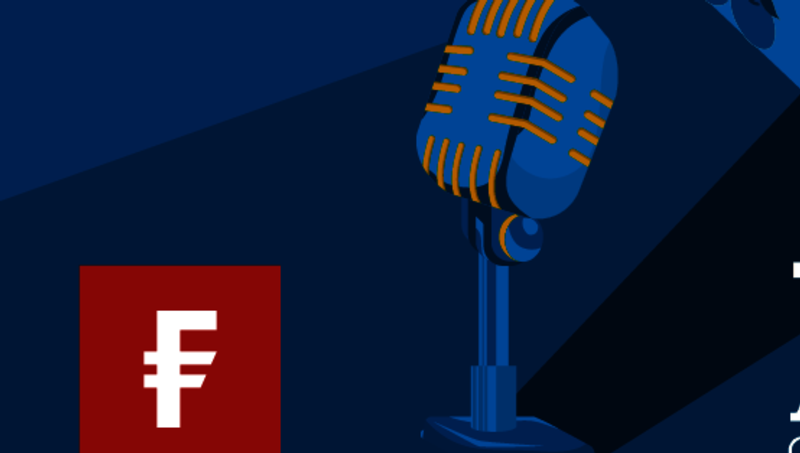 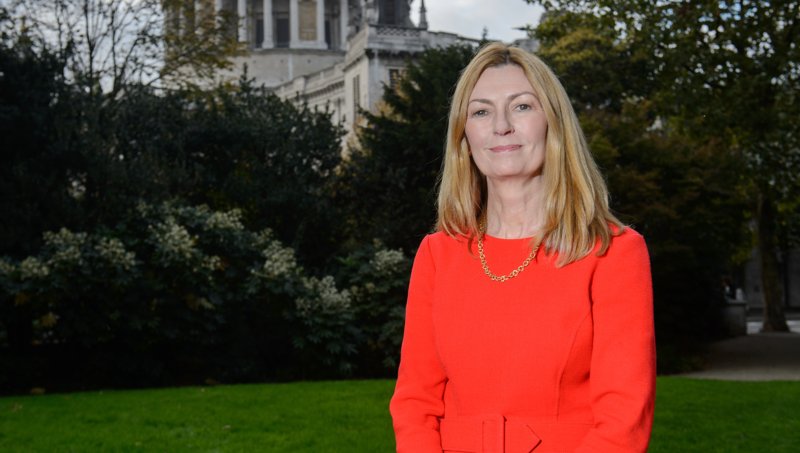 A message from our CEO Anne Richards