After months of lockdown in many parts of the world, it’s not just home-bound workers counting down the days until Covid-19 restrictions are eased. Companies, countries and entire regions are poised to rebound strongly later in 2021 as pandemic measures are rolled back, according to 144 Fidelity International analysts we surveyed about coming trends.

The survey took place in December, before the threat of new variants became clear. In light of this, we re-asked some of the key questions in early 2021. Our analysts report a short-term knock to management confidence as timelines are moved back in some regions, but an even more optimistic corporate outlook for the year ahead. This survey offers investors some sense of the scale of that recovery.

For the first time, a majority of our analysts report that sustainability issues have become a priority for their companies globally, as industries are transformed in the race to net zero carbon emissions. The rise in concern for employee welfare observed during the pandemic will recede somewhat, although it is now permanently on the agenda.

Recovery differs across regions and sectors

Managers across the board are upbeat about the prospects for their companies. And they have good reason to be. Interest rates are low, real yields are negative and fiscal policy is supportive, signalling a favourable environment for a rebound in global growth in 2021 and beyond.

However, the pace of recovery will differ across countries and industries, depending on vaccine rollouts and the potential impact of new Covid variants, creating investment opportunities and risks. China’s ‘first in, first out’ advantage in 2020 should carry through into 2021. Europe and the US will gradually recover as vaccines are rolled out and economies reopen, with the potential for a surge in activity in the second half.

The picture for sectors is positive, but more mixed. The CEOs of energy companies, which have been pandemic ‘losers’, are much more confident than they were for 2020, albeit after one of the worst ever years for the sector. Those running consumer discretionary companies (also net ‘losers’) are optimistic too, but to a lesser degree than those at pandemic ‘winners’ such as technology. Domestic sectors that suffered the most in lockdown should benefit the most from any reopening, though international sectors such as airlines may take longer to recover. 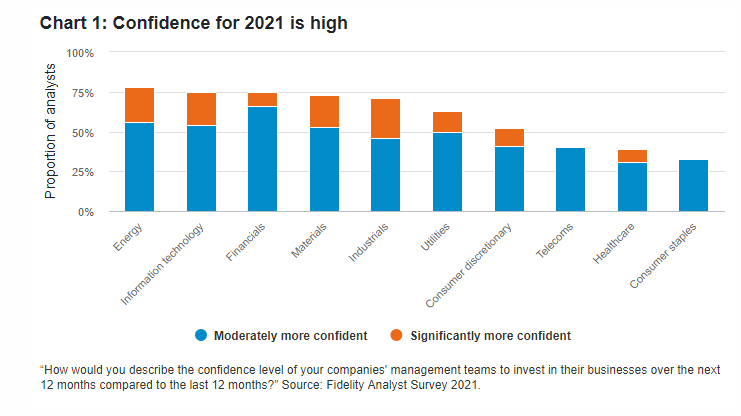 Other findings support the overall improving trend. Our analysts report that mergers and acquisitions are ticking up. Dividends should return after a year in which sectors such as banks and energy were compelled to cut them. Return on capital is set to rise across all regions and sectors (except telecoms and utilities), driven by higher end-demand growth and the restarting of investment that was put on hold due to the pandemic, according to the survey respondents.

Activity will be constrained, however, by a desire to reduce leverage in sectors that borrowed heavily in 2020 to survive. Overall debt is likely to decrease moderately or stay the same in 2021, according to 80 per cent of analysts. Simultaneously, default rates among listed firms are expected to drop from the elevated rates of 2020, assuming credit conditions remain favourable.

A consumer discretionary analyst puts it like this: “Management teams are more willing to invest from the subsistence level in 2021, but it's challenging given they burned so much cash in 2020.” 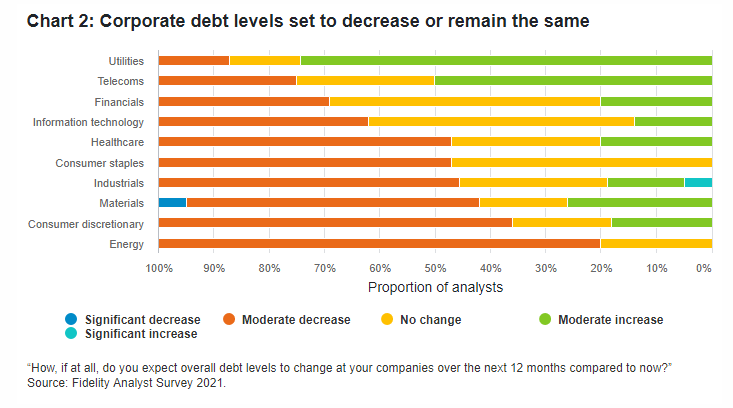 Fortunately, funding costs are expected to fall (everywhere except China), as many central banks seek to keep rates low. Raising capital shouldn’t be a problem, even for sectors such as utilities and telecoms that need to fund big infrastructure projects. Equity and credit markets raised over $400bn in January 2021 alone, almost double the average for the month.[1]

Not your usual cycle

More of our analysts report their sector is in the initial recovery phase of the economic cycle than in any other phase. However, some countries such as Japan (which is geared to cyclical upturns) are expected to have shifted towards mid-cycle expansion by the end of the year.

China appears to be further advanced in the economic cycle than other regions - 36 per cent of our analysts there report their companies are already in mid-cycle expansion compared to 24 per cent globally - with some analysts already expecting growth to slow towards the end of 2021 as the Chinese economy normalises fully. This may be accompanied by a retightening of credit conditions that could slow growth in China. But we expect the strong rebound in other economies would offset this at a global level.

One China consumer analyst based in Hong Kong points out that the sharp recovery last summer was driven by a lot of pent-up demand, with 30 to 40 per cent growth for some businesses, but consumer activity is still not back to 100 per cent. Sectors such as tourism and travel have been largely bypassed. The analyst says: “That’s not to say things aren’t recovering in these areas; it will probably just take some time. Consumption should be the main driver of growth this year, as export demand should moderate.”

Such a rapid shift suggests this is not a typical cycle, in China and perhaps elsewhere. Instead, it looks more like a setback and recovery, rather than a full reset. 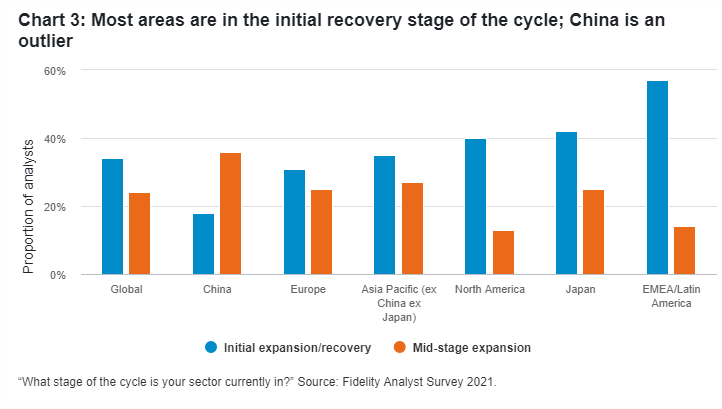 In some countries, the economic damage will take longer to repair. Governments have recognised the need for fiscal as well as monetary stimulus to help businesses recover. In aggregate, the majority of analysts believe that fiscal policy will have a more positive impact this year than last, most of all in Asia Pacific, according to our analysts who cover the region.[2] 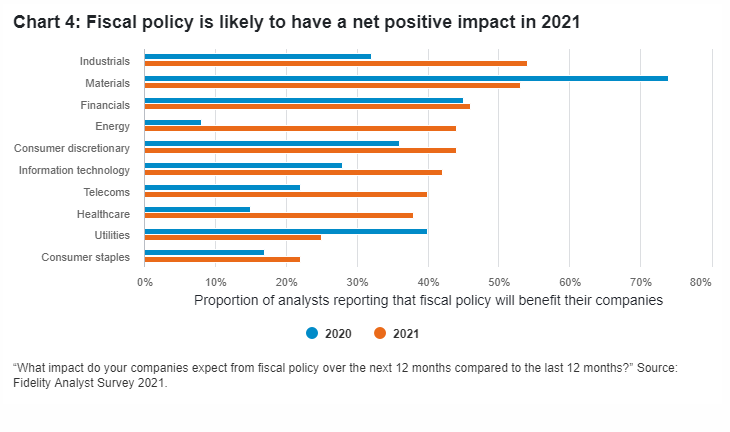 Global stimulus is expected to recede in 2021, especially in countries such as China where the pandemic is relatively controlled. But more support could be needed for specific sectors such as financials and hospitality in developed markets. One banking analyst says: “The vaccine has given some hope, but banks do expect bad loans to form as government schemes start to roll off.” Governments’ ability to borrow to keep schemes in place could be constrained by record debt levels, despite low interest rates.

Fiscal spending is likely to benefit sectors such as utilities and industrials most, especially in North America, while higher corporate taxes could weigh on areas such as healthcare. One industrials analyst says: “The extension of US renewable tax credits in a recent stimulus bill is an incrementally positive fiscal policy development.”

This fiscal tilt towards sustainability ties in with a growing corporate emphasis on ESG, one that stretches across all sectors and regions and builds on a multi-year trend. For the first time, over half (54 per cent) of our analysts report that the majority of their companies now regularly discuss sustainability issues. This compares with 46 per cent in 2020 and just 13 per cent as recently as 2017. Moreover, a quarter of all the companies our analysts cover are likely to reach net zero emissions by the end of the decade. [For more on this topic, see ‘The race to net zero is on’.] 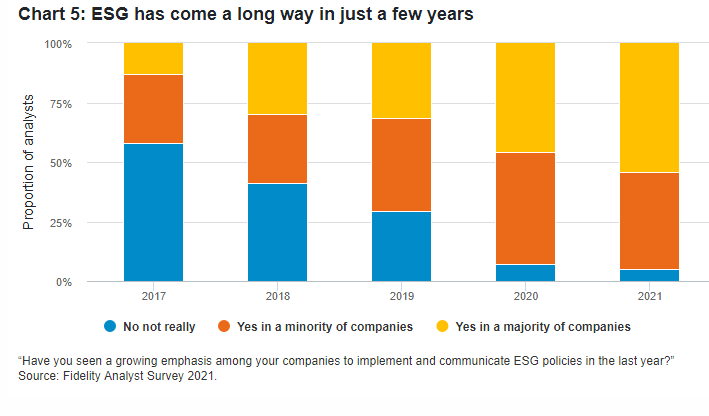 Rules relief for tech but not energy

New regulations on companies will increase at a slower rate in 2021 than in 2020, with the exception of those in China, according to our analysts. One materials analyst covering China says: “Higher capex is likely to be used to meet more stringent environmental regulations around emissions.”

Technology analysts - among the most optimistic for 2021 even after a strong 2020 - expect fewer new regulations in 2021. This is despite the social media storm around the US election and increased interest in regulating online platforms. Instead, the energy sector appears to face the biggest regulatory risk in 2021, especially in relation to curbing carbon emissions. One energy analyst says: “A legislative freight train is coming down the track.” By contrast, after waves of regulation in recent years, financials analysts expect the pace of new rules to slow in the year ahead.

A return to the daily commute still appears some way off for many, but the path to recovery is emerging. Vaccines are the way out of the pandemic, but they take time to roll out and must contend with new variants. Progress will differ between countries, with China still ahead. When economies do finally reopen, our analysts predict that activity could erupt, particularly in some of the worst hit sectors. Investors will have to pay special attention to sector and regional nuances in 2021.

[2] N.B. The survey was completed before the $1.9 trillion stimulus was announced in the US.

This document is issued by FIL Responsible Entity (Australia) Limited ABN 33 148 059 009, AFSL No. 409340 (“Fidelity Australia”). Fidelity Australia is a member of the FIL Limited group of companies commonly known as Fidelity International.
This document is intended for use by advisers and wholesale investors. Retail investors should not rely on any information in this document without first seeking advice from their financial adviser. This document has been prepared without taking into account your objectives, financial situation or needs. You should consider these matters before acting on the information. You should also consider the relevant Product Disclosure Statements (“PDS”) for any Fidelity Australia product mentioned in this document before making any decision about whether to acquire the product. The PDS can be obtained by contacting Fidelity Australia on 1800 119 270 or by downloading it from our website at
www.fidelity.com.au. This document may include general commentary on market activity, sector trends or other broad-based economic or political conditions that should not be taken as investment advice. Information stated herein about specific securities is subject to change. Any reference to specific securities should not be taken as a recommendation to buy, sell or hold these securities. This document contains statements that are "forward-looking statements", which are based on certain assumptions of future events. Actual events may differ from those assumed. There can be no assurance that forward-looking statements, including any projected returns, will materialise or that actual market conditions and/or performance results will not be materially different or worse than those presented. Investments in small and emerging markets can be more volatile than investments in developed markets. While the information contained in this document has been prepared with reasonable care, no responsibility or liability is accepted for any errors or omissions or misstatements however caused. This document is intended as general information only. The document may not be reproduced or transmitted without prior written permission of Fidelity Australia. The issuer of Fidelity’s managed investment schemes is FIL Responsible Entity (Australia) Limited ABN 33 148 059 009. Reference to ($) are in Australian dollars unless stated otherwise. © 2021 FIL Responsible Entity (Australia) Limited. Fidelity, Fidelity International and the Fidelity International logo and F symbol are trademarks of FIL Limited. 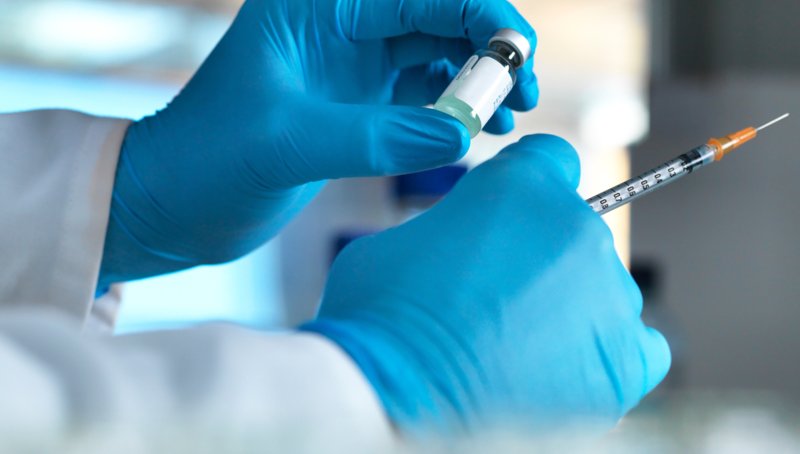 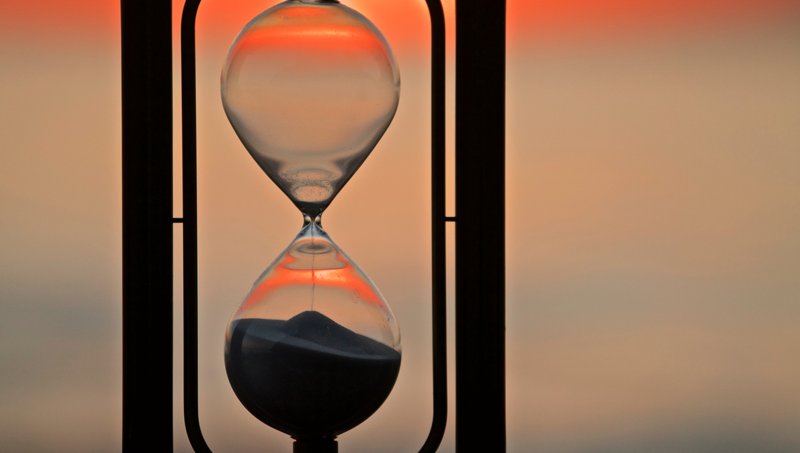 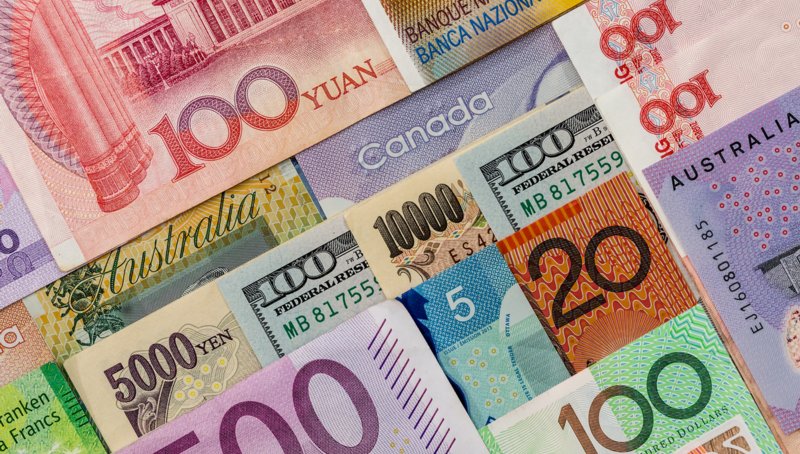 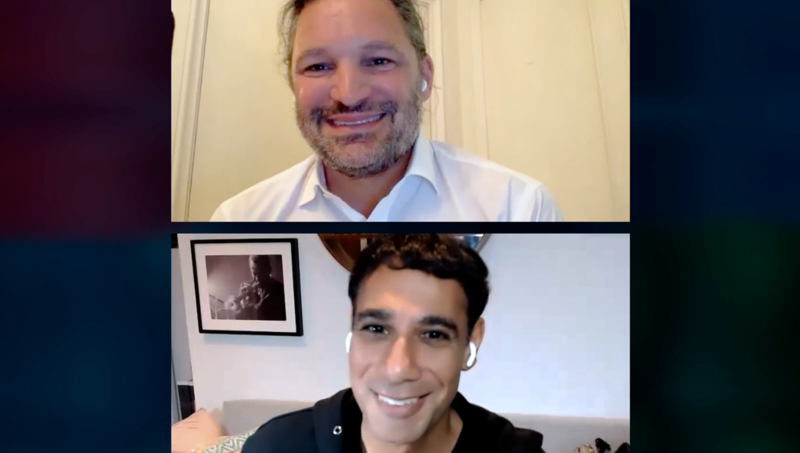 Podcast: The Investor's Guide to China