A time for cool heads as the world order shifts

A time for cool heads as the world order shifts

Russia’s war in Ukraine has raised fears of profound fissures in the global economic and geopolitical balance, while casting scrutiny on China’s stance in the unfolding crisis.

The geopolitical world order in place since the end of the second world war is in a state of extreme flux.

Russia’s invasion of Ukraine and the subsequent use of unprecedented economic and financial sanctions by the US, EU, UK and other aligned nations have brought into sharp focus the importance, and the future, of interdependency among nation states after three decades of fast-paced globalisation.

The broad trend of globalisation, which took hold with the collapse of the Soviet Union in the early 1990s and later accelerated as China joined the World Trade Organisation in the early 2000s, has deepened interconnections across economic, financial, and social dimensions.

However, national interests of major military and economic powers have diverged to the extent that war has come to Europe and triggered a profound shift in the defence and energy security policy of the aligned nations (especially those in Europe that rely heavily on Russian fuel). This change suggests broader tectonic shifts are now in play.

Sino-US relations have become ever more challenging since the presidency of Donald Trump, which saw major disagreements break out between the US and China that played out through the lens of their economic interdependency.

Indeed, the economic dimension of the relationship was put under significant scrutiny. The US-China ‘tariff wars’ that began in 2018 demonstrated for the first time in the era of globalisation that geopolitics was morphing into ‘geo-economics’. The Covid-19 shock appears to have brought an uneasy truce that has provided cover for the unresolved underlying issues, which are captured by the US’s ‘three Cs’ stance (competition, cooperation, confrontation) towards China.

The Russian invasion of Ukraine has led to a sudden and profound shift in the importance and underlying realities of the global geopolitical, and geo-economic, environment. With severe sanctions focussed on crippling Russia’s economy and financial system, China’s role and geopolitical stance have come under immense scrutiny, including Beijing’s long-term approach to Taiwan.

Shorter-term, as Russia becomes increasingly cut off from the western economic and financial system (with a few exceptions such as energy exports), its desire to pivot towards China to mitigate the economic fallout is evident. Furthermore, given the widely reported difficulties encountered by the Russian military in Ukraine, reports of Russia reaching out for arms has added a military dimension, and raised concerns about the potential direct connection of China to a conflict involving the US and aligned nations. Beijing has rejected the reports as an attempt to distort and smear its position on the Ukraine war.

Which way from here?

Suffice to say that today’s geopolitics are not in a steady state. There are multiple scenarios which can be mapped out in terms of how the war in Ukraine develops in the coming days and the ongoing response to Russia.

China’s attempt to maintain a neutral stance to the war coupled with Russia’s request for support mean that US/EU-China economic relations have become front and centre for investors, and especially how they might deteriorate given trade war history (perhaps through sanctions - an extreme form of which were used for Russia). A great deal of goodwill depends on how China navigates the current situation and balances its long-term interests, given the profound shift in the global geopolitical backdrop.

Interdependence remains high between China and other nations

Note that China is significantly more integrated into the world economy than Russia, and that China/developed market interdependence runs much deeper. In terms of current economic share (as a percentage of world GDP on a purchasing power parity basis), China stands at 18.7 per cent vs 3.1 per cent for Russia.

That said, the Europe/Russia linkage through the energy channel is significant (40 per cent of Europe’s gas comes from Russia and 25 per cent of its oil); but tellingly this hasn’t deterred the EU and other aligned nations from imposing  harsh, wide-ranging sanctions on Russia in response to the invasion. 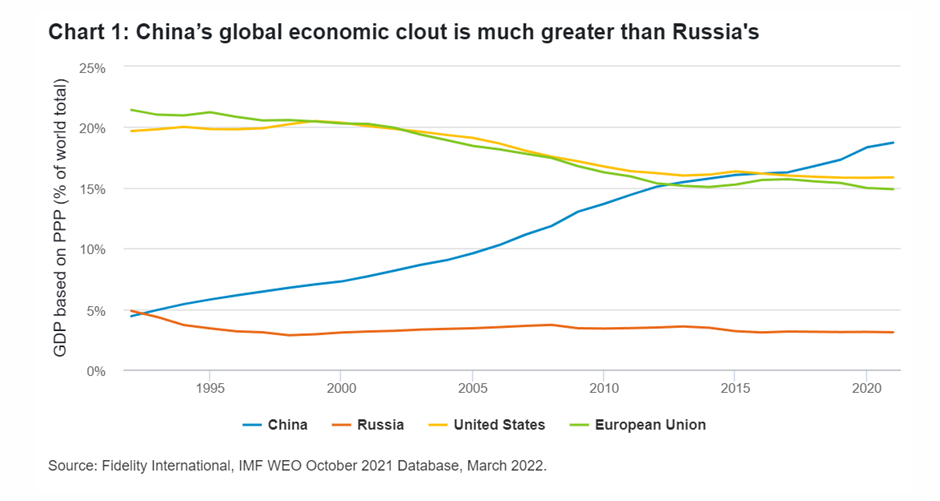 Specifically, China’s net investment position is around $2 trillion USD (as of September 2021) with around US$9 trillion of foreign assets and around $7 trillion dollars of foreign liabilities. For comparison, Russia’s external assets were around US$1.6 trillion (around half of which have been frozen) and around US$1.1 trillion of liabilities (around US$500bn to US$700bn are at risk of full write-down) coming into the Ukraine war (based on the latest data available). 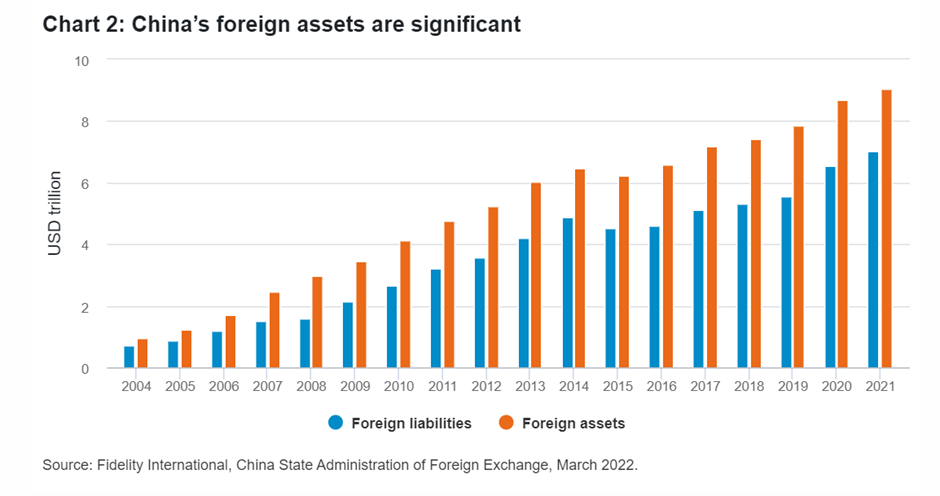 When it comes to trade, the difference is even greater. China’s share of world exports stands at 14.2 per cent versus 2.2 per cent for Russia (for imports the shares are 10.5 per cent and 1.2 per cent respectively) in value terms. 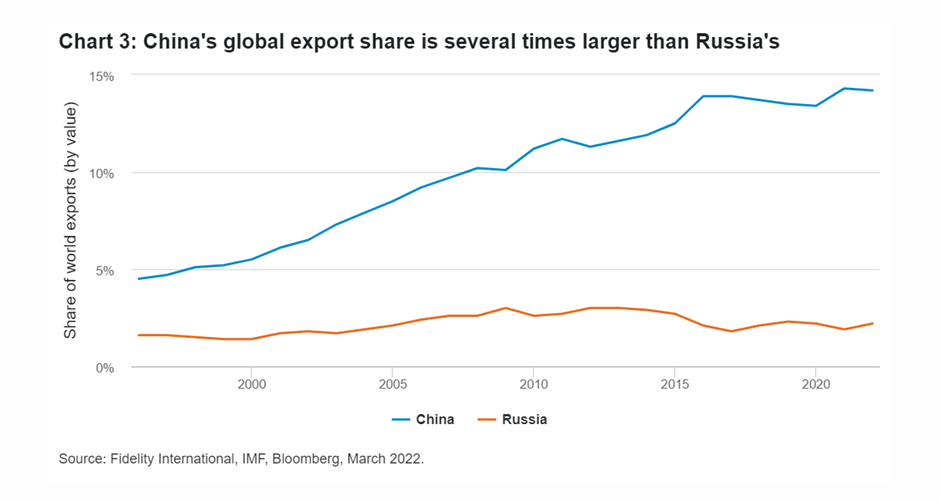 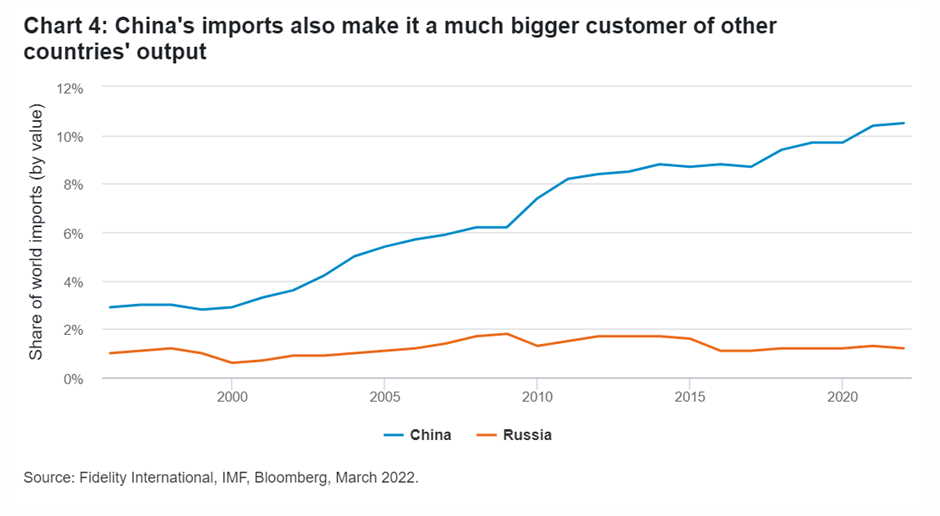 Lastly, it’s worth noting China’s potential for even deeper global financial linkages given the broad focus among policymakers of increasing the internationalisation of financial markets and the currency. The strength of the renminbi in recent months offers a case in point.

The recent news around the de-listing of some China-based ADRs from US exchanges is also being seen in the current circumstances as linked with the confrontational geopolitical environment, although in essence, it is a liquidity transition issue (from the US to Hong Kong) rather than a fundamental one. However, given the context, the linkages with sanctions risk cannot be ignored as investors extrapolate risk.

In addition, from a pure economic perspective, China’s zero-Covid policy has faced a major challenge with the renewed outbreak of Covid variants, which has most recently led to a lockdown of Shenzhen and a partial lockdown of Shanghai along with other measures to curtail outbreak clusters across several provinces. This combined with the scope for further shutdowns could lead to another negative shock for China and the global economy, where our views are already consistent with a broad-based stagflationary environment, with significant risks of an outright recession in Europe.

The need for patience

In this extremely uncertain environment, where era-defining geopolitics are clashing with economic interdependencies (both in actuality and in terms of perceptions/expectations), we recommend patience over rushing to conclusions.

Several scenarios are still possible - from China taking an active stance to stop Russia, to China actively supporting Russia - with a broad spectrum of permutations that could develop and impact expectations around the timetable of events and positioning risk across different markets.

Given we are not in a steady state, both in terms of the exact nature of the relationship with China and its long-term trajectory from here, we prefer to await further developments that arise from this situation before making any major investment decisions. That said, there are clear signs of value emerging across both equity and debt markets, which investors will be quick to realise should clarity begin to emerge on some of the risks we have outlined here.

As noted above, interdependence across China and the US/EU and other developed countries is at a level which is many times higher than the equivalent for Russia (across both economic and financial dimensions). The cost of outright conflict (military and economic) would be catastrophic for the globe. Recognition of this reality in itself opens the door for compromises to appear and be agreed.

From a bottom-up perspective, once the dust settles and the realities of the new world become clearer, it will be important to consider the ESG angle as a differentiator amongst companies and the sustainability of relevant business models (both for domestic and international markets), with a clearer focus on governance and management structures. This area we believe remains a key source of potential returns for investors from a long-term perspective. 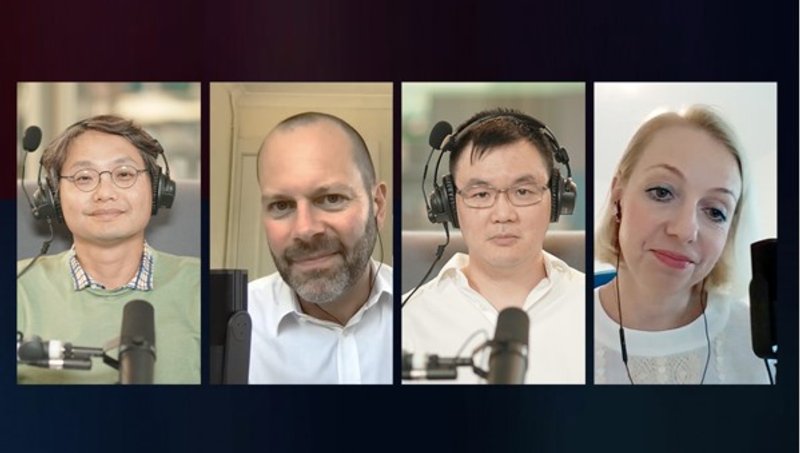 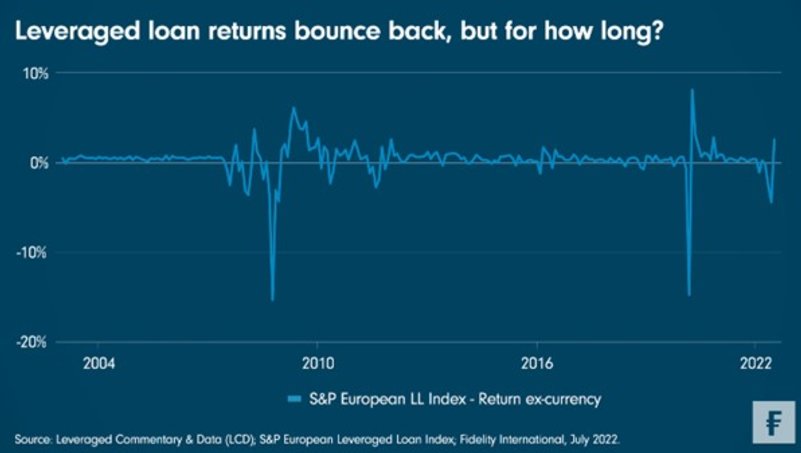 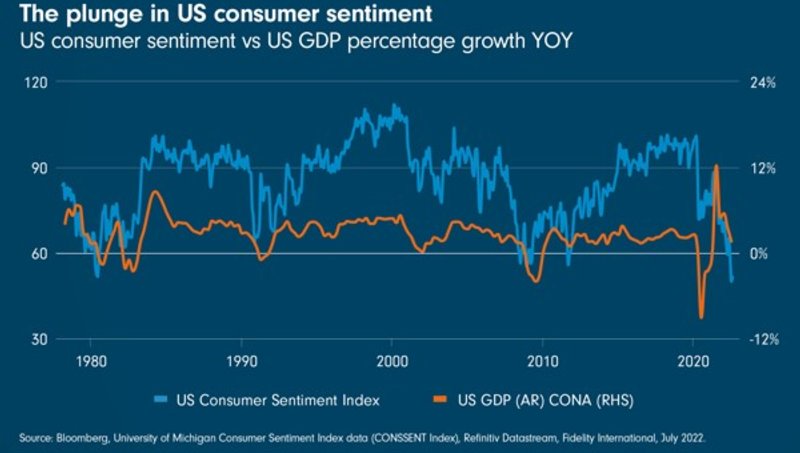 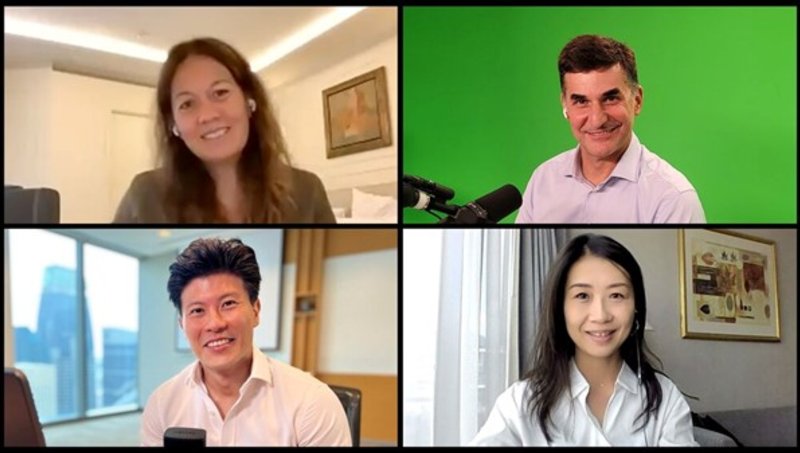